The History of Ambleside

The name Ambleside comes from the Ambleside housing area built in the 1900s off of the Springwater Trail, Johnson Creek by the brick plant on Hogan. One of the streets was called Ambleside.

People from the Portland used the Ambleside housing area for summer homes. They would take the train from Portland to Gresham. There was an Ambleside train stop, along with a Gresham Station train stop.

There were 10 homes total over the course of 100 years. Some were sold, some became dilapitated, paved streets were added — development happened. Johnson Creek frequently flooded and eventually these homes were either sold to Metro, or torn down.

In 2018 Metro took action and bought all the Ambleside property, stripped all the pavement and turned it all back into flood plains.

A gentleman from Metro called Jim in June of 2018 and offered to the Garden the mature plant material. June was NOT the right time to be uprooting any plants! December would of been a much better month, but Jim said he’d come take a look.

Jim assessed the plants and determined he could save eight plants. Him and Jim Buck  pruned, sprayed with wax, and prepared them for transporting over the course of two days for the City to haul to the Garden. Some of the root balls were 5ft in diameter!

At the time, Jim had no idea where he was going to put them, but he knew he didn’t want them to be bulldozed. He first looked at Phase 1 of Ebetsu Plaza but realized that wasn’t going to work, so he looked at the west side of the Plaza and decided that was a good area. They built the planters, mounded the dirt and planted the trees and shrubs. They only lost one plant in the move.

During the planting process, the name Ambleside Annex stuck in Jim’s mind, and that’s how the name was formed. 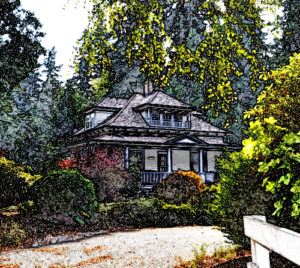 There is one last piece to the story. When Metro came in to bulldoze, one house still stood. It was a Queen Anne style house. Jim was given the opportunity to remove any of the wood work he saw in the house. He grabbed the six pillars (soldiers) that you now see in the Annex.