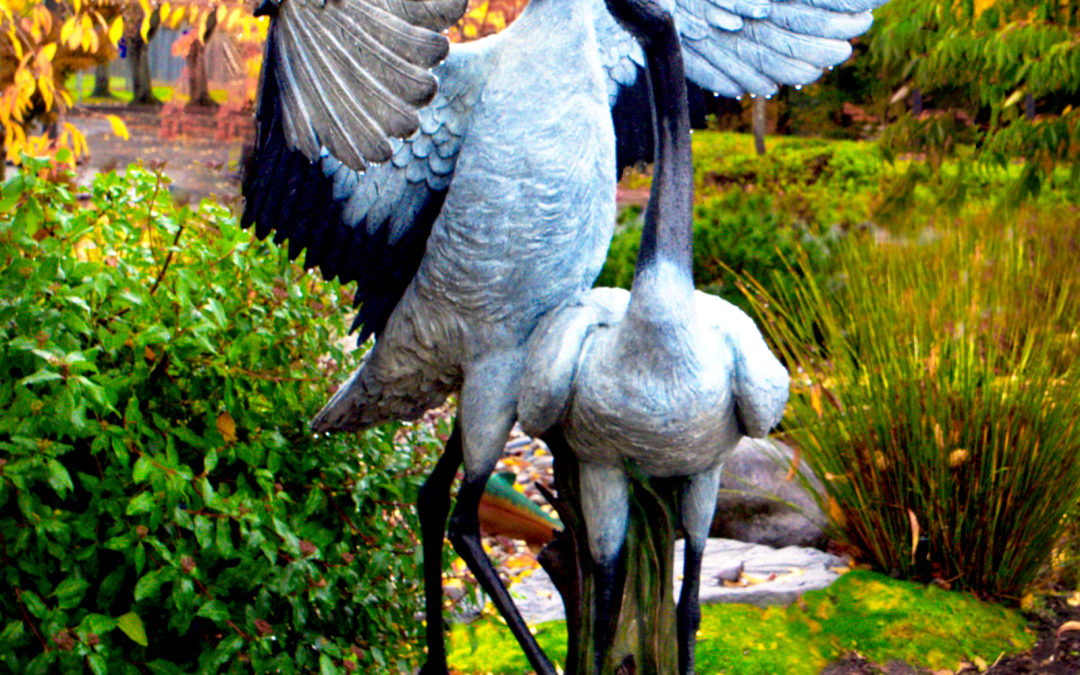 This story is narrated by Jim Card. 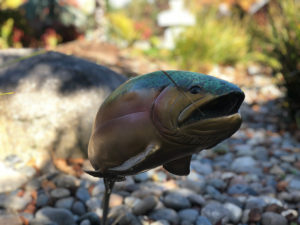 Jim had come across a picture on Pinterest showing a picture of dancing cranes in a flock. One day he was talking to Bill Peterson, our resident photographer, and showed him the photo and a video and they were both entralled with the beauty of the cranes.

A little time had past, and they were both standing in the Resource Center. Bill with his keen eye looking out the window towards Ebetsu Plaza pulls Jim over to the window, points to where the cranes sit today and says “wouldn’t that be the perfect spot to put the cranes.”

This leads to Alyson Huntting. Jim mentions to Alyson about the Bill and his conversation. A little while later, Alyson approaches Jim and tell hims she would like to commission Rip Caswell to create the cranes. From that point on, Alyson and Jim met with Rip and Alison Caswell nine times over nine months in 2019.

The Caswell’s had a similar version of herons that gave them the inspiration to create dancing cranes. The first process was a sketch. This transformed into a table-top version. Then a mold. At one of the visit, Rip formed some of the rocks at the bottom. Eventually the piece went to the foundry and Rip took Jim and Alyson to the Foundry too. During this time, the Caswell’s also had a major fire in the foundry setting the project back a few months.

During one of their visits, Alyson took notice of the fish in the Foundry and asked Rip to create two as well.

There were discussion about anchoring the fish. In the discussion of mounting the cranes Jim and Alyson went to Smith Rock quarry and picked the flat rock that the crane is now mounted on.

Before the crane was installed at Ebetsu Plaza, Alyson and Jim met with the City and City Manager to ensure that the cranes will never leave Ebetsu Plaza.

This sculpture was delayed for over nine months and was a secret until we could give the cranes a proper unveiling. Due to COVID, we ended up unveiling October 31, 2020 with Friends of Gresham Japanese Garden in attendance.