There are Better Ways to Prune Your Bushes 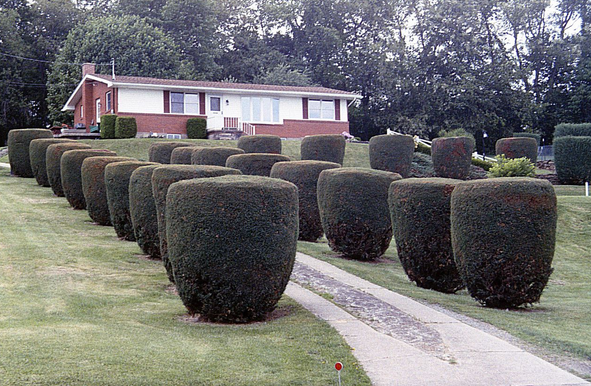 Spring is a good time to prune most of the trees, shrubs, and evergreens in your yard. Unfortunately for many homeowners AND landscapers this means getting out the power shears and whacking back the bushes into balls and boxes. While the resulting “Green Meatballs” might be the norm in American landscaping, it’s not the ideal way to prune woody plants.

Besides being boringly overdone, all of that tight trimming encourages dense growth that shuts off light to all but the outer leaves and slows the drying of leaves in humid or rainy weather, which translates into more incidence of disease.

Healthier and far more interesting pruning techniques are possible. Some of them can turn a plain green bush into a work of art, and most of them take just a little know-how and willingness to try something different.

There are much better ways to prune the landscape: pollarding, coppicing, topiary, Espalier, thinning. 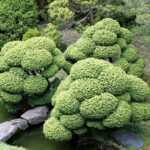 In Japanese landscaping you will find plant art called niwaki. Niwaki is trimming, pruning, and branch-training to create a series of rounded forms that resemble clouds. You can prune densely to create a shrub that looks to have a cluster of clouds or more open to create something that looks like green puffballs on the end of branch arms. Dense evergreens take to this technique best, i.e. boxwood, yew, privet, Japanese holly, and pine.

Another Japapese art is Garden bonsai. Most people are familiar with the Oriental plant art of bonsai in which the artist miniaturizes a tree by growing it in a shallow pot and meticulously pruning the branches and roots. Something similar can be done with in-ground plants, except you won’t be digging up the plants to prune the roots.

The idea is to try and create a unique shape, ideally by pruning to encourage the shape and direction the tree wants to take. You might end up with something that looks wind-blown or that resembles the skeleton of an animal. One of the tricks is pruning just above a bud that’s heading in the direction where you’d like the branch to go. Small deciduous trees are some of the best, such as Japanese maple, dogwood, and seven-son flower, but most evergreens are fine, too, especially pine and juniper.